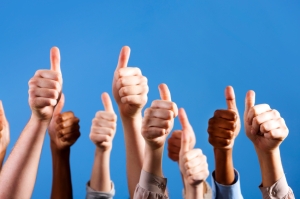 I first heard about the Rail Trail Flatbread Co. when my husband and I were in Hudson, MA a few weeks ago looking for a place to eat dinner. We drove by the restaurant’s downtown storefront – a new brick sign spanned the building, and the windows were covered up. It wasn’t open, but I was intrigued. What was going on with this restaurant, and when would it open?

Not long after that, I saw a Rail Trail Flatbread Co. ad on Facebook that included a picture of the storefront. I liked their page, and was immediately surprised to see that the page already had 400 likes and wasn’t open for business yet!

How did they do it?

Hudson is a small town. So when someone starts a business, people notice. And, like me, they want to know what the heck is going on. A quick Google search revealed that plans for this restaurant were announced a little over a year ago. Shortly after that, the Rail Trail folks started their Facebook page. Good move – anyone who Googled the restaurant would find the Facebook page. And they would like it to be in the know.

No Update is Too Small

Throughout the fall, as the restaurant neared completion, the owners posted updates about their progress a few times a week – no marketing-speak, just quick posts about hiring staff, painting, finishing the bar, putting up the sign, and testing ingredients. These updates helped add to the excitement, and served as a reminder to fans that the opening was happening soon.

Images are powerful – especially on Facebook, where 70% of all activity is based on photographs, according to a study from Overgram.  The study shows that using images can boost your Facebook engagement by 120% for a single photo, and 180% for a photo album. If you’re curious about the new restaurant in town, you’re probably dying to see what it looks like. And, if you’re a beer connoisseur, a Facebook photo of Rail Trail’s 20 taps is going to rock your socks off. That image got 61 likes, 15 comments and 1 share, and demonstrated the power of social word of mouth.

Rail Trail started participating in community events before their opening and posted photos on Facebook – they handed out candy during Hudson’s downtown trick-or-treat walk. They invited people to get an exclusive preview as part of the annual holiday stroll. On more than one occasion, they thanked local businesses and vendors for their help with the renovations, and thanked the community for their support. 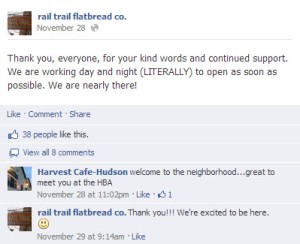 By taking time out to get to know their neighbors and show their appreciation, Rail Trail is forming relationships with future customers. Posting on Facebook is key – fans are used to seeing them in their news feed, and they’re getting to know the business.

By early November, Rail Trail’s Facebook page had around 200 likes. With the opening day a few weeks away, they amped up their fan count by buying Facebook ads – when I finally liked the page toward the end of the month, they had reached 400 fans. They were up to 500 around the week of their quiet opening. Ads allow small businesses to directly target potential fans, based on demographics and geographic information. It clearly worked – they doubled their fan count in less than a month!

I haven’t had a chance to visit Rail Trail Flatbread Co. yet, but I’m already impressed – they’ve proven that you can easily generate buzz for your small business by marketing on Facebook with the right content, and the right mindset.